Resistance, Resilience, and Solidarity: Islamophobia, the U.S. Immigration System, and the Impact on BAMEMSA Communities 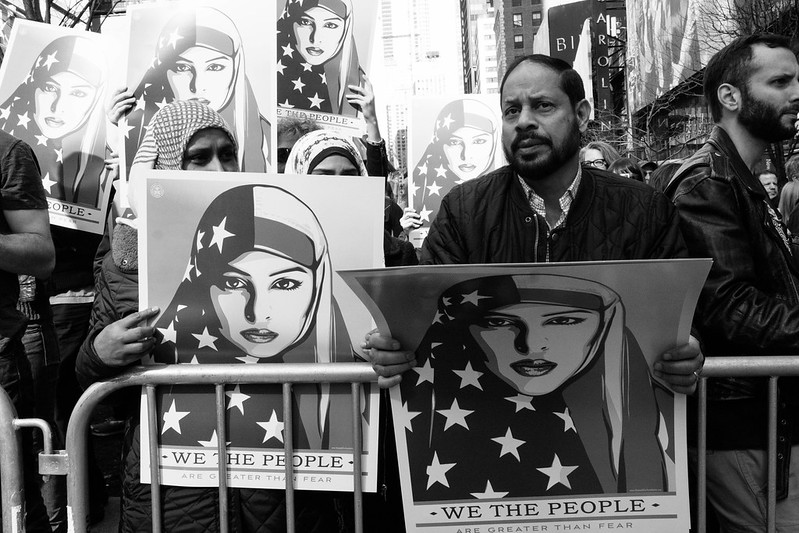 Shortly after dusk this past Friday, my husband took a walk around our north Brooklyn neighborhood. When he returned, he shared with me a photo he took on his phone of the Tribute in Light—twin beams that reach up to four miles into the sky and can be seen from a 60-mile radius from lower Manhattan. This memorial, which evokes the shape and orientation of the Twin Towers, is turned on annually in remembrance of those who died on September 11, 2001.

Across the country this past weekend, we commemorated the 20th anniversary of 9/11, honoring and mourning those who lost their lives during that tragedy. And, as we strive not to forget those who died on that day, we must also, in the words of writer Rozina Ali, “not forget those whose lives were permanently altered by 9/11 without having been anywhere near Ground Zero.” Indeed, we must continue to reckon with the ways in which the aftermath of 9/11 unleashed violence, discrimination, and hatred toward Black, Arab, Middle Eastern, Muslim, South Asian (BAMEMSA) and immigrant communities across the country. In doing so, we must confront not only the myriad ways in which that Islamophobia persists to this day but also the ways in which U.S. immigration policies have reinforced and sanctioned that Islamophobia.

Much has been written about how U.S. domestic and foreign policies were transformed in the wake of 9/11. As has been widely reported, political leaders justified these emerging laws and new agencies under the guise of a supposed threat of extremism. Using “national security” as a legitimizing principle, government agencies justified the surveillance, detainment, deportation, and incarceration of BAMEMSA communities through a diverse set of regulations, laws, and establishments. Prominent examples include:

As the state engaged in increased profiling, targeting, and criminalizing of BAMEMSA communities, these communities—in the United States and around the world—also experienced a dramatic increase in hate crimes perpetrated against them. During just the first week after 9/11, community organizations documented 645 incidents of bias and hate against Americans perceived to be of Middle Eastern or South Asian descent. In the subsequent 20 years, anti-Muslim hate crimes have never dropped below their pre-9/11 levels. As Janna Ramadan notes in Perpetuating Islamophobic Discrimination in the United States: Examining the Relationship Between News, Social Media, and Hate Crimes, “[t]he introduction of bans on the burqa in France, oppression of Uyghur Muslim populations in China..., the Christchurch mosque shooting in New Zealand, and the U.S. Muslim ban display the degree to which the stereotype [connecting] Muslim populations and terrorism has permeated society….”

Despite the dual oppressions of state-sponsored discrimination and structural violence, a vibrant and resilient movement came together to combat anti-Muslim hatred, Islamophobic narratives, and the erosion of civil liberties, and new organizations emerged. Members of the Sikh community formed the Sikh Coalition, an organization that has won numerous court cases against workplace discrimination, school bullying, racial profiling, and hate crimes, and has secured the passage of groundbreaking religious rights laws. Representative Pramila Jayapal, in response to the post-9/11 targeting of immigrant communities of color in Seattle (primarily Muslims, Arab Americans, East Africans, and South Asians), founded the Hate Free Zone, which would eventually become One America, the largest immigrant and refugee advocacy group in Washington State. And established advocacy groups like Desis Rising Up and Moving (DRUM) and the Council on American-Islamic Relations (CAIR) countered pervasive anti-Muslim narratives, defended the civil liberties of BAMEMSA communities, and organized with other communities to advocate for long-term, structural policy change.

And yet, despite the significant contributions that BAMEMSA communities have made to building enduring social justice movements, they remain under-invested and under-resourced. Philanthropy has the opportunity now—on this 20th anniversary of 9/11—to counteract this historical underinvestment and support leading-edge work that better serves not only BAMEMSA communities but all communities. The authors of the blog post titled Twenty years after 9/11, still fighting the criminalization and dehumanization of our communities offer a strategic blueprint for the various ways that funders can strategically increase their support to BAMEMSA communities. Among other supports, funders can:

Funders and other allies can also join the Proteus Fund’s Call for Solidarity and Joint Investment in BAMEMSA Communities. GCIR—and GCIR members like Heising-Simons Foundation, Unbound Philanthropy, Pillars Fund, and General Services Foundation—have signed on to this pledge, both as an expression of solidarity with BAMEMSA communities and as a commitment to raise at least $50 million for BAMEMSA communities’ field work over the next five years.

To deepen my own learning about the ongoing impact of 9/11 on BAMEMSA communities—and about the ongoing solidarity that has been nurtured and built in response to the aggression and violence that was unleashed in its wake—I will be attending 20 Years After 9/11: Lessons in Solidarity, a teach-in hosted by Building Movement Project and SolidarityIs. Later this week, GCIR Vice President of Programs Ivy Suriyopas will participate in a panel titled Centering and Investing in Impacted Communities Twenty Years Post-9/11, where she, Representative Jayapal, and others will discuss how important it is for philanthropy to resource ongoing work to address Islamophobia, xenophobia, and racism.

As GCIR’s president, my job—among others—is to visibilize the work of immigrant and refugee communities that are often excluded from philanthropic investment and opportunities. For me, this is an important solidarity practice, one that is “anchored in the belief that communities who are most marginalized must be at the center of decision-making about the conditions that will change their daily circumstances.” The work of SolidarityIs is instructive on what such practices look like; I invite you to reflect on how your grantmaking strategies and investments are emblematic—or not—of being in solidarity with BAMEMSA communities. Our solidarity work with BAMEMSA communities is ongoing, of course, and critical to building an enduring multiracial democracy, grounded in racial and social justice.