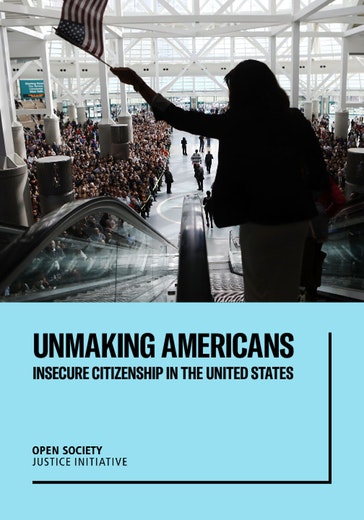 In the United States, citizenship is a unifying force built around a core set of commonly agreed ideals, including the inherent equality of all people. Yet U.S. citizenship law and practice are marked by gaps, weaknesses, and opportunities for arbitrary decision-making. Today, those gaps and weaknesses are being exploited to take U.S. citizenship away from members of marginalized groups.

This report and corresponding fact sheet document three techniques currently being used to attack the identity and sense of belonging of U.S. citizens:

Unmaking Americans looks at the costs of these initiatives, providing first-hand accounts from affected U.S. citizens. The report also shows how current efforts to destabilize the security of citizenship for certain groups fit within historical patterns of politicians seeking to manipulate xenophobia for political gain, and offers recommendations for reform that would prevent further abuse.

Materials: What's Next For DACA?

Find all program-related materials for the webinar, "What Next for DACA?" here, including recording and DACA Funding Recommendations.

Find all webinar-related materials for "Refugees, Reslience, and COVID-19: Opportunities for Philanthropic Engagement" here, including powerpoint and recording.

This year’s Juneteenth celebration comes amidst a painful moment of reckoning for our country with a legacy of anti-Black racism that continues to permeate our society. While the shocking and abhorrent deaths of Black men, women, and children at the hands of law enforcement may be the most visceral examples of racial inequity, we know the challenges go far deeper. Today we stand in steadfast solidarity with Black-led organizations working to combat anti-Black racism.